By day, seventeen-year-old Kiera Johnson is an honors student, a math tutor, and one of the only Black kids at Jefferson Academy. But at home, she joins hundreds of thousands of Black gamers who duel worldwide as Nubian personas in the secret multiplayer online role-playing card game, SLAY. No one knows Kiera is the game developer, not her friends, her family, not even her boyfriend, Malcolm, who believes video games are partially responsible for the “downfall of the Black man.”

But when a teen in Kansas City is murdered over a dispute in the SLAY world, news of the game reaches mainstream media, and SLAY is labeled a racist, exclusionist, violent hub for thugs and criminals. Even worse, an anonymous troll infiltrates the game, threatening to sue Kiera for “anti-white discrimination.”

Driven to save the only world in which she can be herself, Kiera must preserve her secret identity and harness what it means to be unapologetically Black in a world intimidated by Blackness. But can she protect her game without losing herself in the process?

END_OF_DOCUMENT_TOKEN_TO_BE_REPLACED 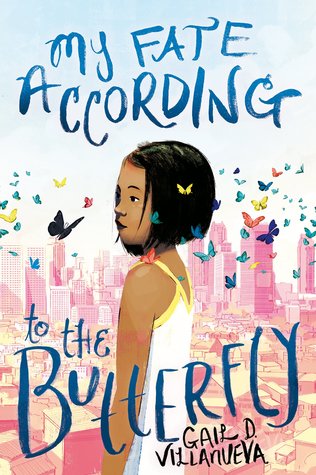 Light and deep, smart and funny, crushing and hopeful all at the same time, My Fate According to the Butterfly will open your eyes to both the world’s potential for magic, and to its harsh realities.

When superstitious Sab sees a giant black butterfly, an omen of death, she knows that she’s doomed! According to legend, she has one week before her fate catches up with her — on her 11th birthday. With her time running out, all she wants is to celebrate her birthday with her entire family. But her sister, Ate Nadine, stopped speaking to their father one year ago, and Sab doesn’t even know why.

If Sab’s going to get Ate Nadine and their father to reconcile, she’ll have to overcome her fears — of her sister’s anger, of leaving the bubble of her sheltered community, of her upcoming doom — and figure out the cause of their rift.

So Sab and her best friend Pepper start spying on Nadine and digging into their family’s past to determine why, exactly, Nadine won’t speak to their father. But Sab’s adventures across Manila reveal truths about her family more difficult — and dangerous — than she ever anticipated.

Was the Butterfly right? Perhaps Sab is doomed after all!

END_OF_DOCUMENT_TOKEN_TO_BE_REPLACED

Project Runway meets Mulan in this sweeping YA fantasy about a young girl who poses as a boy to compete for the role of imperial tailor and embarks on an impossible journey to sew three magic dresses, from the sun, the moon, and the stars.

Maia Tamarin dreams of becoming the greatest tailor in the land, but as a girl, the best she can hope for is to marry well. When a royal messenger summons her ailing father, once a tailor of renown, to court, Maia poses as a boy and takes his place. She knows her life is forfeit if her secret is discovered, but she’ll take that risk to achieve her dream and save her family from ruin. There’s just one catch: Maia is one of twelve tailors vying for the job.

Backstabbing and lies run rampant as the tailors compete in challenges to prove their artistry and skill. Maia’s task is further complicated when she draws the attention of the court magician, Edan, whose piercing eyes seem to see straight through her disguise.

And nothing could have prepared her for the final challenge: to sew three magic gowns for the emperor’s reluctant bride-to-be, from the laughter of the sun, the tears of the moon, and the blood of stars. With this impossible task before her, she embarks on a journey to the far reaches of the kingdom, seeking the sun, the moon, and the stars, and finding more than she ever could have imagined.

Steeped in Chinese culture, sizzling with forbidden romance, and shimmering with magic, this young adult fantasy is pitch-perfect for fans of Sarah J. Maas or Renée Ahdieh.

END_OF_DOCUMENT_TOKEN_TO_BE_REPLACED

I don’t think I’ll ever have the words to fully describe just how much I enjoyed my time as one of the people hosting Randy Ribay’s book launch for Patron Saints of Nothing last Sunday. Being able to work closely with the author, the publisher, and the whole Bookworms Unite PH team is hands down one of the highlights of my 2019 so far, and even though I’m not sure if I’ll do the experience justice, I would certainly like to try. So! Without further ado, let’s get this recap started!

END_OF_DOCUMENT_TOKEN_TO_BE_REPLACED

A powerful coming-of-age story about grief, guilt, and the risks a Filipino-American teenager takes to uncover the truth about his cousin’s murder.

Jay Reguero plans to spend the last semester of his senior year playing video games before heading to the University of Michigan in the fall. But when he discovers that his Filipino cousin Jun was murdered as part of President Duterte’s war on drugs, and no one in the family wants to talk about what happened, Jay travels to the Philippines to find out the real story.

Hoping to uncover more about Jun and the events that led to his death, Jay is forced to reckon with the many sides of his cousin before he can face the whole horrible truth — and the part he played in it.

As gripping as it is lyrical, Patron Saints of Nothing is a page-turning portrayal of the struggle to reconcile faith, family, and immigrant identity.  END_OF_DOCUMENT_TOKEN_TO_BE_REPLACED

Some of the contents that are published in Book Freak Revelations are made possible through the generosity of the following partners: